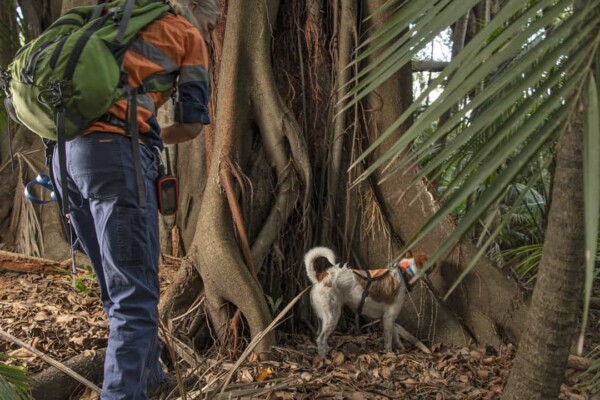 The World Heritage listed Lord Howe Island is staggeringly beautiful. Evolving in isolation 600 kilometres off the east coast of Australia, its precipitous mountains, golden beaches and dense subtropical forests are home to hundreds of species of plants, insects and animals found nowhere else on Earth.

But behind the postcard idyll a battle is being fought. Around 1850 mice were inadvertently introduced to the island. Rats came in 1918, escaping a sinking ship. The rodent population boomed as they ate the island’s insects and seedlings, destroyed bird eggs and devastated crops, leading to the extinction of five bird and 13 invertebrate species, and threatening another 70.

In 2019 – after 20 years of studies, trials, planning and community engagement – a six month program of baiting, dog detection and monitoring was launched to eliminate rodents from the island. Led by the Lord Howe Island Board, the Rodent Eradication Project was supported by numerous partners, including the Invasive Species Council.

“We didn’t know for sure it was the last rat,” she says. “We needed more monitoring to be confident. But we were hopeful.”

As rodent monitoring continued, the project’s benefits were slowly revealed. The breeding success of the black-winged petrel increased from 2.5 per cent to more than 50 per cent. Numbers of the Lord Howe Island woodhen – a flightless bantam-sized bird – have more than doubled. Populations of the island’s many endemic species of land snail began to recover, including two critically endangered species. Plant species recovered too, with more seeds and seedlings, including those of the critically endangered little mountain palm.

The price of freedom (from rodents) is eternal vigilance. Since October 2019 there have been more than 80 reported rodent sightings, each one carefully followed up with no positive rodent signs confirmed.

So when a community member reported seeing two rats on 14 April 2021, the Lord Howe Island Biosecurity team followed their standard procedure for a reported sighting.

After 18 months with no positive rodent signs, it was a momentous discovery.

With confirmation rats were on the island, the team immediately launched the rodent response plan they had prepared for just this eventually. Supported by members of the NSW National Parks and Wildlife Service, the response team quickly deployed five detection dogs, 1493 bait stations, 1300 monitoring devices and 125 trail cameras to fight the outbreak.

“At that stage we didn’t know if it was just two rats or a lot more,” says Ms Matassoni, “so we planned for both the best and worst-case scenarios.

“After those first two rats it was a full eight days before we detected another rodent. The main cluster ended up being just a few hundred metres from where the original rats were detected. It shows just how hard they are to detect when they are in such low numbers.”

Genetic testing is currently underway to determine if the rats are survivors from the island’s initial rodent population or have been inadvertently reintroduced from the mainland.

To date 96 rats have been eliminated, with no sign of rodents detected since 28 July. Intensive monitoring will continue until the end of the year, to provide further confidence in the outcome of the response effort.

For Ms Matassoni the outbreak was yet another lesson in the battle to control invasive species.

“It emphasises the importance of ongoing biosecurity, in preventing other invasive species from establishing on the island.”

“After all, it’s an amazing privilege to play a part in protecting Lord Howe Island’s natural environment and saving species from extinction.”

We’re keeping a hopeful eye on the Lord Howe Island situation. Normally the success of an island eradication requires no rodent sightings for a full two years of intensive monitoring.

The April 2021 outbreak now resets the clock on the official declaration of eradication. It also highlights just how vital island biosecurity is in the fight to keep rodent hitchhikers and other unwanted pests from arriving via regular cargo ships from Port Macquarie and elsewhere or in the luggage of arriving air travellers.

After the recent outbreak, biosecurity surveillance and animal control measures have already been upgraded.

If eradication is declared and the island’s rodent free status can be maintained, Lord Howe Island will be the world’s largest inhabited island that can boast it successfully eradicated rats. It will begin an exciting pathway to ecological recovery and inspire similar efforts in other island communities.