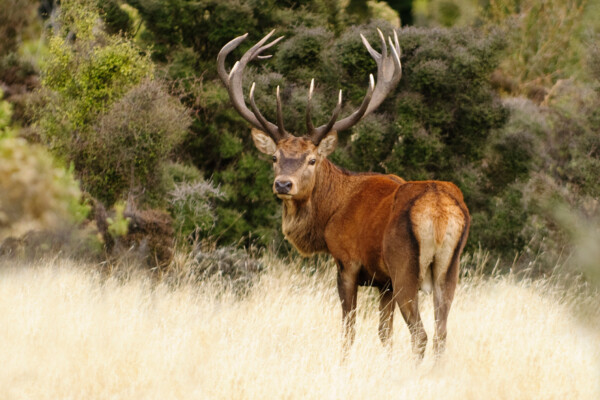 After the very successful Prodeer baiting application on Molesworth station in 2021,  Prodeer has again proved itself in a heavily monitored operation and large landscape area of the Hawke’s Bay.  Manaaki Whenua Landcare Research (MWLR) undertook the study and monitoring to determine the effectiveness of Prodeer for deterring red deer from eating bait for OSPRI.

A 5,395 ha area at Willowflat Forest was aerially poisoned in October 2021.  Trial cameras were deployed for 4 months prior to the operation and for 2 months post the aerial baiting.  A nearby unpoisoned area, the Maungataniwha Pine Forest was also monitored over the same period.   Over 188,500 photos were analysed comprising 18,770 visits and 25,600 visitors (a visit could include more than one deer).  80 trail cameras were deployed using a non-random design with high animal use sites targeted.  Most cameras (88%) remained functioning for the full monitoring period although some stopped prematurely (seven pre poison and 12 post-poison).

MWLR concluded that no red deer by-kill was detected when Prodeer was used at Willowflat Forest and they noted that the result is consistent with the excellent result from Molesworth Station.  Baiting was carried out when spring growth was abundant, possibly reducing the likelihood of a high by-kill if no Prodeer had been used.  However, from a trial on Molesworth in 2017 where standard 1080 bait has been used at the same time of year with the same fresh spring grass growth, a high by-kill of deer has been observed, indicating that deer could find standard 1080 bait more palatable than fresh grass growth with resultant mortality.

A number of fallow deer were photographed in the poisoned area after baiting had occurred.  It’s likely they were exposed to Prodeer but lower activity rates and low numbers prior to poisoning meant they were not recorded.  MWLR note that this is an indication that this species may also be deterred from eating 1080 cereal baits if Prodeer is used.

For possums, Prodeer had high control efficacy with a 95.6% reduction in possum activity following poisoning.  MWLR again recommended that Prodeer bait should be used where avoidance of a high risk of deer mortality is operationally important.

(Permission provided from OSPRI to publish these results)